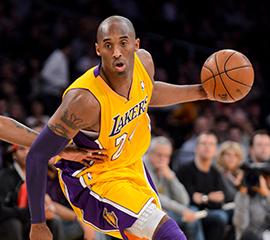 After 17 years in the NBA, Kobe Bryant is still one of the best players in the league.

Why?  — his insane work ethic.

A few Kobe stories that illustrate just how hard he works:

o   Shaq wrote in his book:  “You’d walk in there and he’d be cutting and grunting and motioning like he was dribbling and shooting — except there was no ball.”

Story courtesy of an anonymous athletic trainer:   All the Team USA players were there, feeling good for the first scrimmage. LeBron was talking to Carmelo if I remember correctly and Coach Krzyzewski was trying to explain something to Kevin Durant. On the right side of the practice facility was Kobe by himself shooting jumpers. And this is how our next conversation went — I went over to him, patted him on the back and said, ‘Good work this morning.’    (Kobe had met the trainer at 4:15am that morning; they worked out for about 2 hours.  The trainer went home after the workout to sleep and assumed Kobe had done the same as there was a scrimmage scheduled later that morning at 11:00am)…

Kobe:  ‘Oh. Yeah, thanks. I really appreciate it.’

Trainer:  ‘So when did you finish?’

Trainer:  ‘Getting your shots up. What time did you leave the facility?’

In effect, Kobe showed up seven hours early for an off-season scrimmage.